The road to Misty Fest started in March, at Espaço Espelho d’ Água, in Lisbon. Great artists present their shows in a more intimate format usually on the last Sunday of each month.

This Misty Session with emmy Curl is part of the “Autumn in the Village” program.

In this beginning of 2022, after returning from Denmark, where at some point she decided to live, after pregnancy and overcoming the time of isolation, after returning to Portugal, to live in Funchal, after so much, emmy Curl decided it was time to look back at the artistic path she started in 2007 and has gathered in 15 Years a set of pieces that she believes define this chapter. And so there are recreations of themes from her two albums – “Volto na Primavera” comes from Nadia (2015), “Devesas” and “Aliados” belong, of course, to the lineup of Oporto (2020) – but also from the EPs she has released: “Clarity” was originally included on Origins (2012).

There is also a fantastic version of “Maio Maduro Maio”, a song that refers to a period in which she lived in Aveiro: all her songs are, in fact, entries in a diary that she continues to write. 15 Years will be published on CD and vinyl and, the artist explains, “will carry images and visual creations of my own as well as my portraits, some self-portraits, in chronological order since then”. A work as personal as it is revealing, therefore.

“Meanwhile,” Emmy further reveals, “I am composing an album, a declared love of my land – Trás-os-Montes – where I explore the traditional sounds and songs of the mountains. It is a work that I see as a contribution to my base of influences with all the learning I have gathered during these last 15 years. Being a mother has also freed me from many stigmas and insecurities, inspiring me to create much more free of judgment, it is a great enthusiasm and pleasure to be able to sing my roots with such a thirst for freedom,” she admits.

Vibra was, in a way, a huge surprise: JP Coimbra’s name was familiar from other
of other “movements”; the creator of Mesa was also a collaborator of notable The creator of Mesa has also collaborated with notable projects such as Três Tristes Tigres, Goldfinger, and Bandemónio de Pedro Abrunhosa, but has moved into new fields with his debut album in his own name. “Vibra is an album of instrumental music where sound experimentation reigns in a pleasurable discourse,” wrote Rimas e Batidas. JP Coimbra crossed the electronic with a vision closer to the neo-classical and let himself be inspired by emblematic spaces of Porto, in which he recorded, capturing, in a way, the deepest “vibration” of the city: the Casa da Música, the Marquês subway station, the Fundação de Serralves, the Rio da Vila, all these places are impregnated in Vibra.

With Fogo na Água, musician and composer Francisco Sales enters a new phase of his career. In this third album – which succeeds 2017’s highly acclaimed Miles Away -, the guitarist invested four years of work and presents himself exploring the sound of different instruments – not only the electric and acoustic guitars, but also the 12-string or the iconic metallic guitar known as dobro – to erect a very emotional set of pieces that evoke ideas of strength, struggle and resilience, also navigating through some contrasting notions already pointed out in the title: fire and water, earth and air, primordial elements that here translate into highly evocative music and in which the foundational Portuguese identity is explored – as happens in “Pulsar da Terra”, for example.

The musician, who in England worked closely with Jean Paul Maunick’s Incognito, has now called on Beatriz Nunes, an acclaimed jazz singer who was part of Madredeus, to add her voice to his own compositions for the first time. Francisco assures us that Beatriz represents his own soul. In this work that the composer himself describes as more cinematographic and in which he guarantees to have reinvented himself as composer, the production was shared with Tiago Gomes. Live, Francisco Sales will for the first time perform in a trio, taking over all the guitars himself while Sandra Martins assures the cello and voice and Edu Mundo takes care of drums, percussions, and even gives a hand on guitars and voice. A new trio for a new music that Francisco Sales now wants to share with the world.

The São Paulo singer Vanessa Moreno and the Paraíba pianist Salomão Soares had already played together in larger groups, but when they met for a studio recording they had the idea of a duo project. Thus came “Chão de Flutuar” (2019), the first album that critics defined as a “preciousness”, by bringing songs from different styles of music, with a lot of improvisation both in voice and piano, but without losing the subtleties and lyricism of this small formation. Two years later they released “Yatra-Ta”, confirming the idea of being the most expressive Brazilian jazz duet of today. The repertoire includes composers such as Joyce Moreno, Luiz Gonzaga, Djavan, Hermeto Pascoal, and Tania Maria, one of the duo’s main influences and the inspiration for the name of this second work.
The term “Yatra”, in Sanskrit means “Journey of Transformation”. The refined musical affinity between Salomão and Vanessa brings a freshness to this second work, which is grounded in Brazilian roots and has creative freedom as a fundamental element in the construction of the arrangements and in the execution.

The New Life, an atmospheric and emotional solo piano piece released in 2022 on streaming platforms, is fast approaching 3 million plays on Spotify, an astonishing mark that was guaranteed by Lemos, Portuguese pianist and producer who for years was part of pop-rock projects and also worked in film and television, but who after the pandemic felt a very special musical calling and focused on composing piano pieces. Lemos explains that his music expresses a very particular kind of vibration that is established between the Cosmos and the Earth, and that he is a kind of conductor between these two dimensions. Sense of Peace, his debut album, topped the iTunes Portugal charts and helped him gain over 400,000 monthly listeners on Spotify, a remarkable mark that speaks volumes for the reach of his music and positions him as the Portuguese neoclassical pianist with the most listeners on that platform.

On November 25, Lemos plans to release a second album, where he continues his exploration of the piano in a neo-classical context that he is well versed in, having studied the instrument formally since the age of 11. His music, deeply emotional, also lives from a very specific creative intention of a clear conceptual nature: in 2022, Lemos developed “The Felt Library” project, a selection of neoclassical music of his own composition, and built the first virtual Felt Piano instrument, totally free for composers and already with more than 1,000 downloads on Pianobook. The new work will include 12 pieces created on his vertical Felt Piano. A new world of immersive music that will be manifested in a carefully thought out concert. 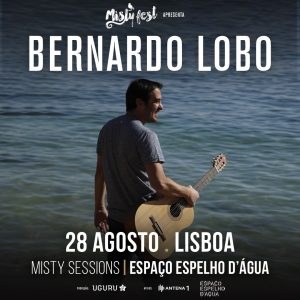 Bernardo Lobo is a Brazilian singer and songwriter, born in Rio de Janeiro into a musical family. His father, Edu Lobo, is one of the most celebrated treasures of Brazilian song, and his mother, Wanda de Sá, also an artist, was part of Sérgio Mendes and Marcos Valle’s groups, besides having recorded under her own name.
Bernardo grew up immersed in this musical circuit, getting used from an early age to the presence of some of the greatest figures of Brazilian culture. And, as the very Portuguese saying goes, “the son of a fish can swim”. And sing and play the guitar, of course. With a 25-year career and seven albums released – Nada Virtual (2000); Sábado (2006), Sábadovivo (2008), Valentia (2012), C’ALMA (2018), Uma Viola Mais que Enluarada (2019) and Zambujeira (2021), Bernardo is now preparing a presentation at Espelho de Água, in Lisbon, on August 28.
For this intimate encounter to which he has given the title “Itineraries”, Bernardo will bring songs such as “Yara”,
(originally a partnership with Ivan Lins and Moyses Marques), “Vai e Vem”, which he wrote with Tiago Torres da Silva; “Menina das Nuvens”, written with Marcos Valle, or even “Imagem e Semelhança”, a collaboration with Milton Nascimento. Bernardo will also present songs by other artists that have influenced him such as Caetano Veloso, from whom he will sing “Força Estranha”, and his father, Edu Lobo, from whom he will interpret the emblematic “Ponteio”.
Always with voice and acoustic guitar, the purest way to show the truth of the songs.

Veteran Tó Trips has a vast experience with a career that began in rock, led to the celebrated Dead Combo and in more recent times also manifested itself in Club Makumba.
But in parallel, Trips has also developed a curious and original approach to the solo guitar, having released works such as Guitarra 66 or Guitarra Makaka.
With a new album on this personal and solitary adventure on the way, Tó Trips will once again dive headfirst into the sea of notes he plucks from his guitar, in an exploratory solo concert in which he will show new and old compositions always evocative of great landscapes and all-inclusive stories, from euphoria to melancholy.

The project Os Poetas arose from meetings between Rodrigo Leão, Gabriel Gomes and Hermínio Monteiro, then publisher of Assírio & Alvim, in whose collection there were recordings of poets saying their own poems. “Entre Nós e as Palavras”, from 1997, was the result of intense months of composition, of an affinity with the chosen poets, and of the accomplice friendship between the two musicians, which is very noticeable when they compose and when they perform. With Francisco Ribeiro (ex-Madredeus) and Margarida Araújo on strings, the ensemble performed some concerts in the 1990s.
In 2013, Os Poetas returned with the reissue of this long out-of-print album. During 2012, they composed new songs and reformulated the show, projecting the texts and calling the actor Miguel Borges to say poems.
This is not a concert for scholars or specific readers and poetry lovers. As the word is very important, and the starting point for the composition – it is the commander of this “Ship of Mirrors”; – the music is not a mere support, as it ends up merging with the poems. The spoken music is mixed with performance, resulting in a unique and enchanting show.

With a career spanning over 15 years, São Paulo singer and songwriter Anna Setton has performed on the world’s biggest stages. In this show she presents the album Onde Mora Meu Coração, released in 2021, a collection of songs consolidated in the Brazilian popular songbook, in exciting and unique interpretations, and some songs from her 2018 debut album. The show also features the special participation of Edu Sangirardi, pianist and Anna’s partner in several compositions.”

Carrying the telluric memories of the Trás-os-Montes region where she was born, but also the experience gained in a metropolis like Copenhagen, emmy Curl brings to Portugal her music made of dreams and challenges. In this concert emmy presents her new album 15 years, a personal “best of” of the songs she has composed throughout her career.

Nancy Vieira is one of Cape Verde’s great voices, a true ambassador of the great sound of morna that intimately knows the nuances and history of her country’s culture. The singer is currently preparing the successor of Manhã Florida, an ambitious artistic project with a careful repertoire that may deserve a preview in this presentation in which she is accompanied by Paulo Borges on the piano. We couldn’t wish for a better debut for these Misty Sessions at Espelho d’Água, in Belém, Lisbon.